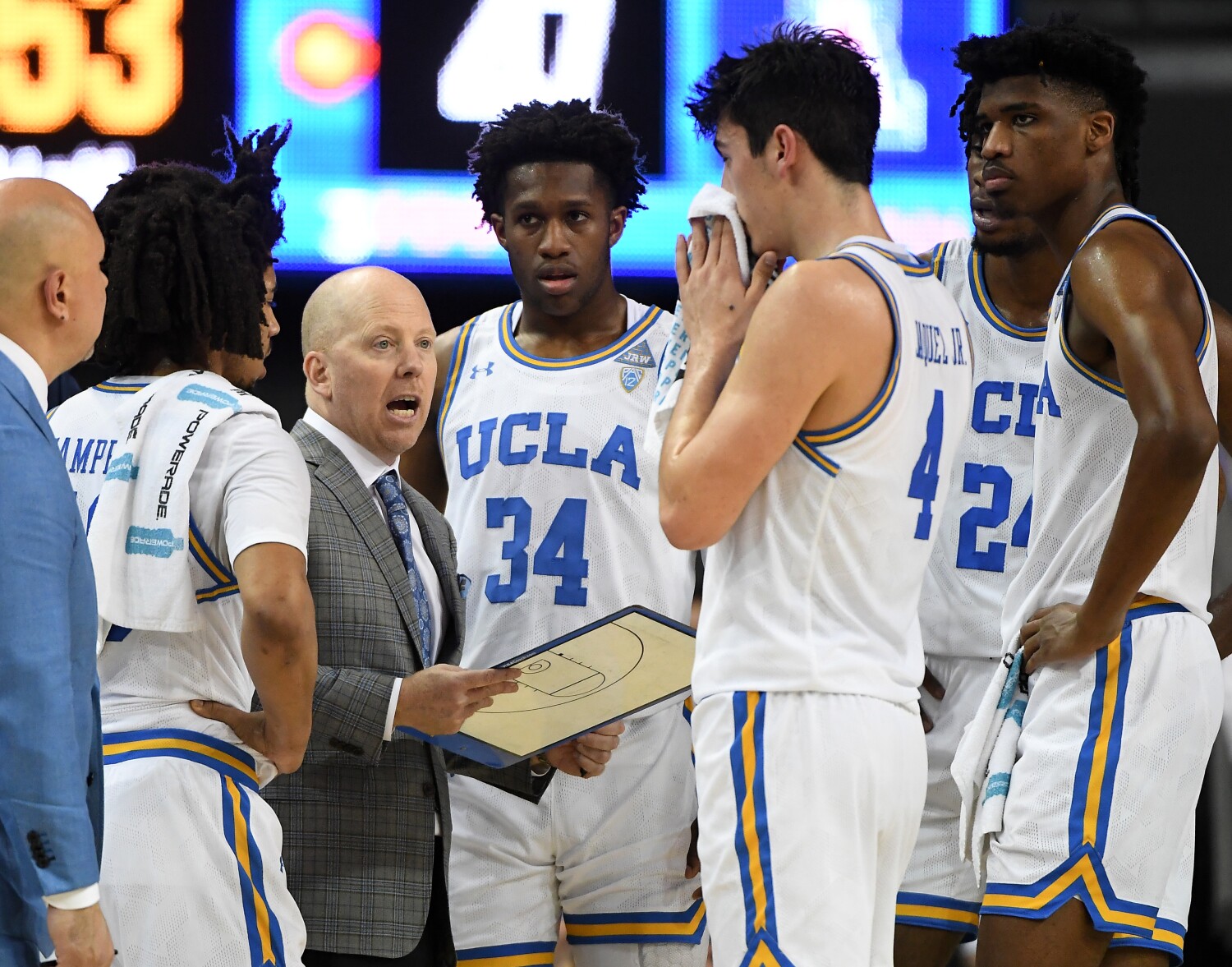 A year ago, as he stood in an elevator foyer inside the Pac-12 Conference’s San Francisco headquarters, Mick Cronin quipped that he cared more about traffic on the 405 than he did about his team being picked to finish toward the bottom of the conference.

The UCLA basketball coach has a similar indifference about being nationally ranked before one game has been played.

“That and $4.50 will get you a cup of coffee at Starbucks,” Cronin cracked Monday during a telephone interview.

The Bruins were ranked No. 22 in the Associated Press preseason poll released earlier in the day, their first appearance in the national ranking since they were No. 17 in November 2018. That UCLA team opened the season with four consecutive victories before staggering to six losses over the next nine games, costing coach Steve Alford his job and showing the reliability of preseason projections.

Cronin, whose team returns all five starters and eight of its top 10 players, acknowledged there was some upside to being picked to succeed.

“Obviously, you’d rather be ranked than not because it would stand to reason you’ve got some returning players or people think you have some talent,” he said, “but other than that, traffic and the cost of coffee’s more important. It’s preseason. It’s where you finish, not where you start.”

UCLA was among three Pac-12 teams in the preseason poll; Arizona State checked in at No. 18 and defending conference champion Oregon was No. 20. Stanford was among the other teams receiving votes.

Gonzaga topped the preseason poll for the first time in school history and was followed by Baylor, Villanova, Virginia and Iowa, with the Hawkeyes also claiming their highest ranking before a season opener.

Expectations haven’t been this high in Westwood since Lonzo Ball and T.J. Leaf led the Bruins to 31 victories and an appearance in an NCAA tournament regional semifinal four years ago during their only college season.

The Bruins return 88.8% of their scoring output from last season, when they won 11 of their final 14 games to finish with a 19-12 record upon the shutdown of the Pac-12 and NCAA tournaments because of the COVID-19 pandemic. Jaquez said last week that the team would try to adopt the same underdog mentality that propelled its strong finish.

“Last year, we weren’t ranked at all, people counted us out from the beginning,” Jaquez said. “So we’re gonna try to keep that same chip on our shoulder. Rankings don’t really matter at the end of the day. You still got to go out and play and the best team wins.”

UCLA is trying to finalize a schedule that could have it open with games against San Diego State and Pepperdine during Thanksgiving week as part of a four-team tournament at Viejas Arena in San Diego. Cronin said he wanted to bolster his early strength of schedule for NCAA tournament selection purposes in case other marquee nonconference games were canceled as a result of the virus.

“If you’re going to try to build a resume on a possibly shortened schedule due to COVID, you have to try to think ahead that you might lose some games,” Cronin said. “What happens if we get shut down and lose Marquette and Kentucky? We want to try to get some good games off the bat.”

Minimizing viral spread has been as emphasized as avoiding turnovers in early practices. Cronin said he’s limiting how long players stand next to each other in drills and might curtail the number of contact practices once games start in an effort to help ensure his team can keep playing.

“You can show you did shooting and ran through plays in the scouting report so if somebody gets [the virus], we can say, ‘Hey, we haven’t had contact in 48 or 72 hours,’ so we don’t get shut down,” Cronin said. “That won’t be our call when that day comes, but we can try to mitigate it as best we can with planning, trying to think everything through.”

Cronin said he continually emphasizes with his players that they must remain vigilant in warding off the virus even though nobody on the team has caught it since returning to campus in September.

“Just because you don’t have it or nobody else in our gym has it doesn’t mean it’s not in Westwood,” Cronin said. “It’s everywhere. You cannot let your guard down.”