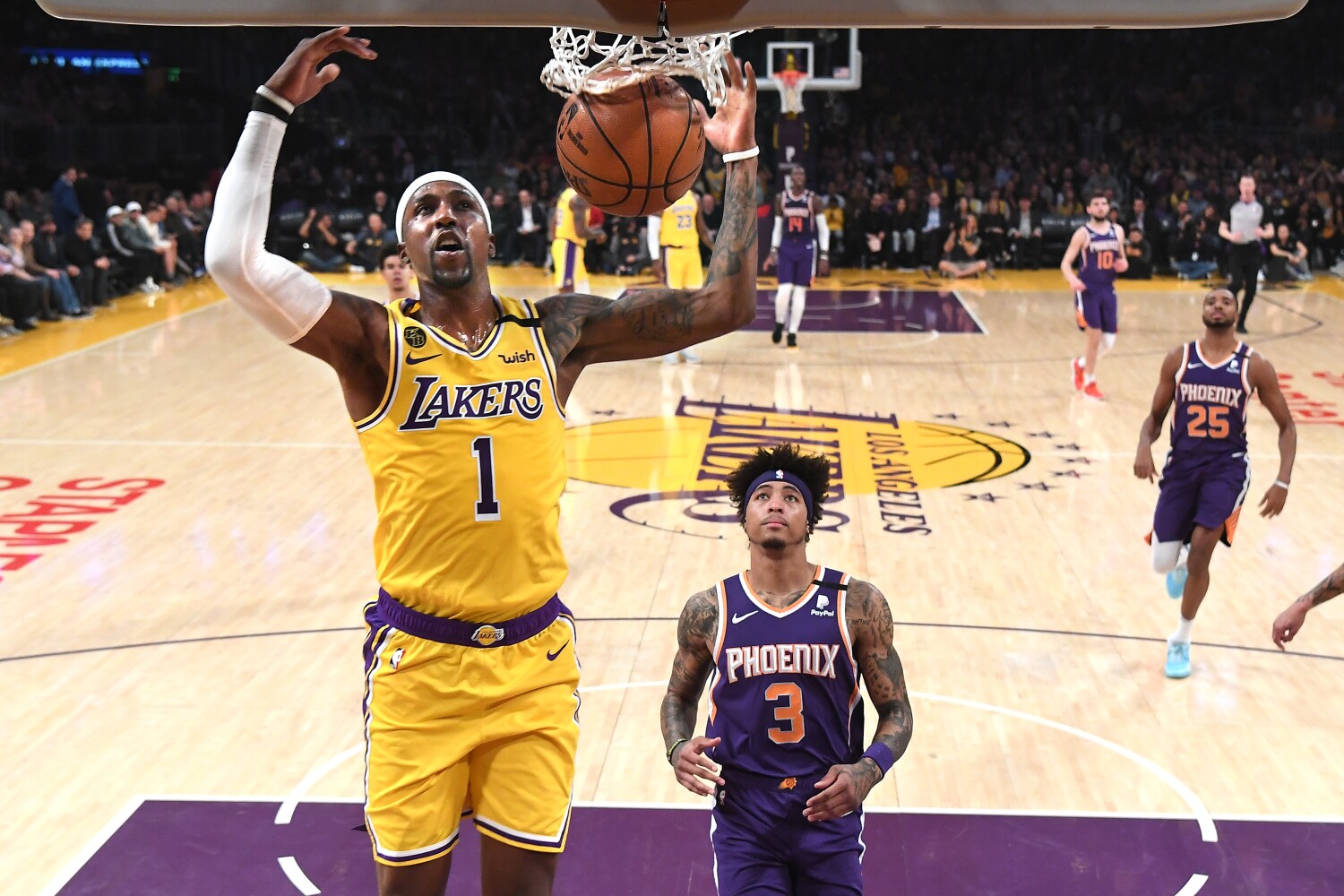 Patrick Beverley and Lou Williams, the stalwarts from the Clippers’ backcourt, peacocked across a casino floor in Las Vegas, their team the unquestioned winners after a wild night of free agency.

It was the summer of 2019, and all that covered their faces were ear-to-ear smiles as the backcourt basked in the aftermath of the Clippers landing Kawhi Leonard and Paul George in one fell swoop.

But the transactional title doesn’t count for anything other than some good social media brags. And Los Angeles’ teams (and their fans) should know even a condensed free agency still takes some time.

One NBA offseason that feels like an eternity later, there are familiar lessons, the Lakers looking like the period’s big winner after perfectly executing their title defense plan. They agreed Saturday to re-sign Kentavious Caldwell-Pope, keeping a critical floor spacer and wing defender in the fold.

The move caps a week that has rival scouts, coaches and executives impressed with the defending champions’ ability to add Caldwell-Pope, Dennis Schroder, Montrezl Harrell and Wesley Matthews to offset the losses of Rajon Rondo, Avery Bradley, Danny Green and Dwight Howard.

“I like [the moves],” one rival scout said. “I think they make them better.”

LeBron James seemed to approve, using Twitter’s new “Fleets” function to show his approval for the acquisitions. A couple of emojis isn’t quite the same as the Vegas victory lap Williams and Beverley went on in 2019, but in a pandemic, you do what you can.

The Lakers moves in total rivaled the other high-impact deals on Saturday — Toronto re-upping with the deserving Fred VanVleet and the Charlotte Hornets pushing all-in on Boston Celtics wing Gordon Hayward.

Across town, though, the Clippers aren’t saying much this offseason. They’ve earned a reputation as one of the NBA’s stealthiest operators, moving without much of a trace as to what’s coming next.

Something better be on the horizon — seeing players move off the board has moved some Clippers fans to the edge of panic.

But the lessons of 2019, coupled with the Clippers’ past in general, should be enough to lower heart rates.

The Lakers, though, were able to find a lot of value at the back end of free agency last year after opponents had invested heavily on the first two waves of players who agreed to deals, pulling off Plan B after Leonard picked the Clippers.

The Clippers themselves weren’t even built during the first wave of free agency in 2019, they too held hostage by their pursuit of Leonard while Kevin Durant and Kyrie Irving teamed up in Brooklyn and Jimmy Butler landed in Miami.

Now options are definitely dwindling. Rondo is in Atlanta. Center Tristan Thompson is headed to Boston. Forward Jae Crowder is going to Phoenix. Any of those players, and others who have already reached agreements, would’ve helped fill in some of the gaps in the Clippers’ rotation.

But there’s time for the Clippers to still execute their plan because we still don’t really know much about the Clippers’ plan. They’re one of a handful of teams who didn’t make an executive available as business reopened this past week in the NBA. The last time we heard from a Clippers official was in mid-October after the team hired Tyronn Lue.

It’s left people to guess. The Clippers need a point guard, defensive help in the frontcourt, and more leadership. So far, they’ve added shooting and underrated playmaking in Luke Kennard and brought back Marcus Morris, but there are still a lot of boxes left unchecked.

If you ask around the NBA, people expect the Clippers to have something special up their sleeves.

“They’ve got to, right?” one Eastern Conference executive said.

Sure enough, as the hours rolled into the night Saturday, the Clippers landed one of free agency’s biggest fish, former NBA champion Serge Ibaka, more than shoring up some holes in the frontcourt. It’s not everything they need, but it’s a lot of it.

This year is as good of a time for optimism as any, and as the Lakers and the Clippers head into the season in the next few weeks, there’s reason to feel good about the first two days of free agency.

The Clippers still have Leonard and George and the continuity between those two players might mean even more to them than the eighth guy in their rotation. And while the point guard hunt continues, landing Ibaka eases the sting from the first 24-plus hours of free agency.

And the Lakers have made good on their pledge not to be complacent, and they’ll try to do it as they fill out the fringes of their roster. It’s obvious that they’ve attacked free agency with a plan and got to it.

Both should be pleased.