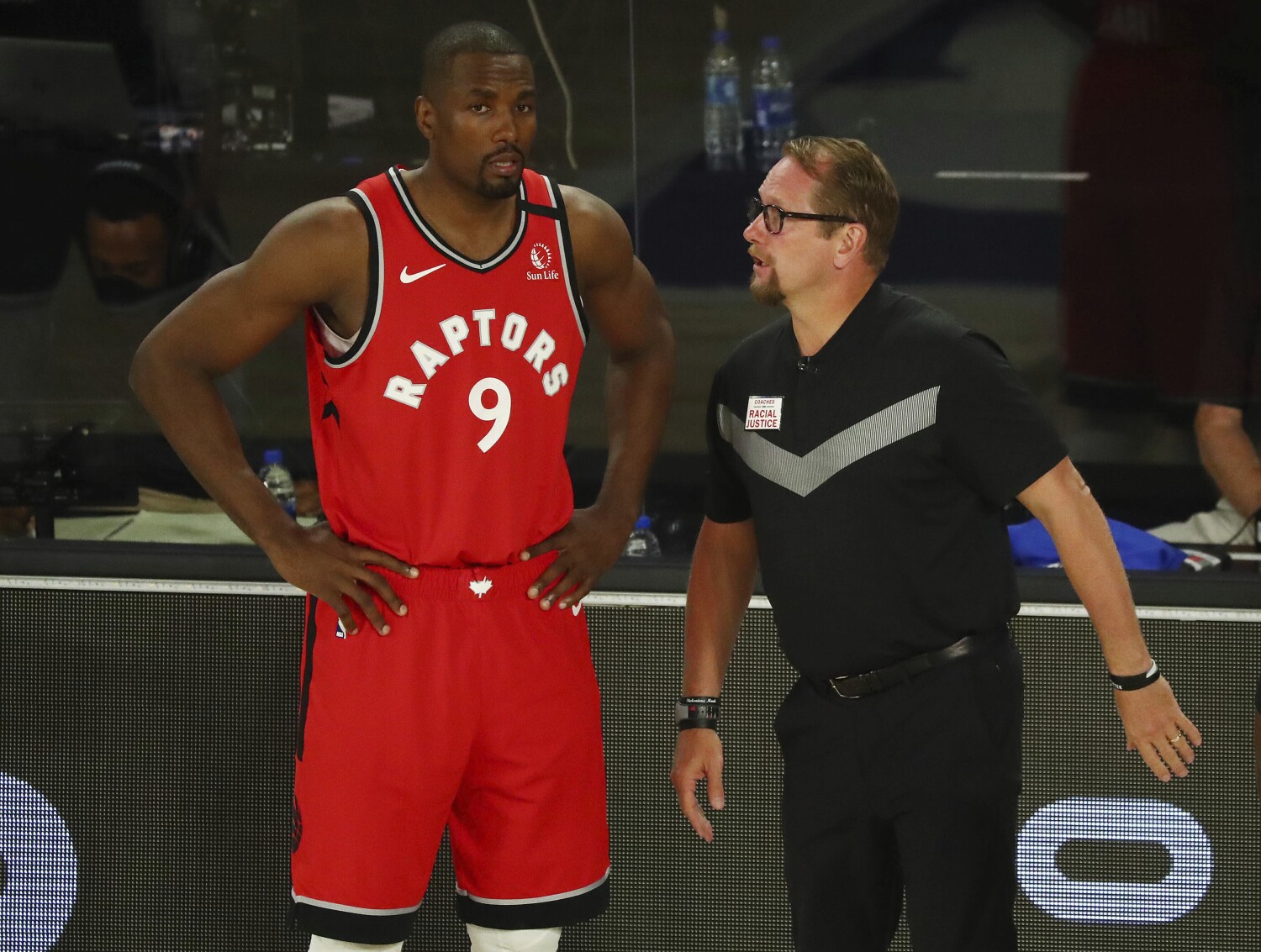 The Clippers made their big move to get a big man.

A day after frontcourt staples Montrezl Harrell and JaMychal Green departed in free agency, the Clippers reached an agreement with Serge Ibaka on a two-year contract worth $19 million, a person with knowledge of the deal confirmed. It represents a notable splash for a team whose prospects at signing a highly regarded big had appeared to grow slimmer by the hour Saturday.

The 31-year-old Ibaka brings 144 games of postseason experience that includes the 2019 championship he won with Toronto playing alongside Clippers forward Kawhi Leonard. The 7-footer will sign for the team’s full midlevel exception next season, worth $9.3 million, the person confirmed.

Ibaka is coming off a season in which he shot an effective field-goal percentage of 56.4%, the second-highest mark of his career, while averaging 15.4 points and 8.2 rebounds. He also made 38% of his three-point attempts.

A three-time member of the NBA’s all-defense team, Ibaka broke into the league as a stalwart of Oklahoma City’s starting lineup but in recent seasons gave Toronto a boost off the bench. He could slide into a similar role with the Clippers playing behind young starter Ivica Zubac.

Ibaka’s size and flexibility to play multiple frontcourt positions, roam the paint defensively and also step beyond the perimeter to stretch opposing defenses is considered a stark upgrade from Harrell, whom the Clippers lost to the Lakers on Friday after a career-best season yet was confined to playing a narrower role of purely center because of his size and shooting.

The Clippers are now expected to turn their sights to other areas of demand on their roster, including a playmaking guard and backup forward who can help spell Leonard. The Clippers were known to have interest in one such guard entering free agency in Rajon Rondo, but he reached an agreement earlier Saturday with the Atlanta Hawks.

Before the Clippers landed Ibaka, a steady stream of athletic backup centers had signed elsewhere: Nerlens Noel to New York, Tristan Thompson to Boston. Those moves had followed the events of the night before, which seemed to put the team in a difficult position as it sought help up front.

When free agent Jerami Grant turned down Denver’s three-year offer worth a reported $60 million in favor of bolting for similar terms but a larger offensive role in Detroit late Friday, the Nuggets increased their pursuit of Clippers free agent Green.

Given more time to gauge how the rest of their free-agency puzzle was coming together, there was a chance the Clippers could have come back to Green, who had declined a player option worth $5 million Thursday, with an offer close to the full mid-level exception, worth $9.3 million. But with Grant out of the picture in Denver, the Nuggets could immediately offer a raise, a potential starting role — effectively replacing Grant in the lineup — and a chance to parlay that role into an even bigger payday in 2021, when more teams are expected to have salary-cap space. Green agreed to a two-year contract with Denver worth $15 million, with a player option for the second year.

Harrell’s departure from the Clippers was seen by some league observers as inevitable. Green’s decision to leave, however, stung because it wasn’t a foregone conclusion. Plus, his versatility and three-point shooting would now strengthen the Nuggets, the team that eliminated the Clippers in stunning fashion in the second round of the postseason, in September.

Almost 24 hours later, the Clippers provided the balm. Just before 9 p.m., they emerged from a day of quiet maneuvering to shore up a key need.